It looks like the fall is here. It's raining outside and it's getting colder. Just to cheer you up a little, here's something colorful... 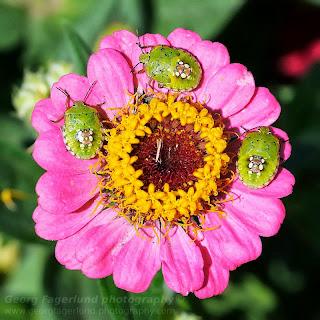 ... a group of green stink bug larvae. For me it looks like there is still one "seat" free.
Posted by Georg Fagerlund at 11:46 PM No comments: 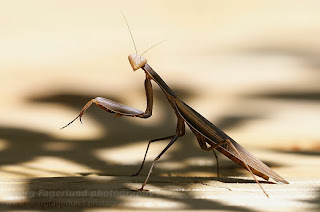 Praying mantis counts as one of my favorite insects. One reason is that they often look like they pose for the photographer. It's pretty easy to make them stare at you just by moving your hand in the direction were you want them to look. As big insects you don't need to be too close to them to get a frame filling shot and it's pretty easy to move them around too. This gall (?) was hiding under our terrace stairs when my wife found her. The place wasn't too neat for a picture so I gently grabbed her in the mid body and moved her in to the light.
Posted by Georg Fagerlund at 8:33 AM No comments:

Added a new species in my life list this weekend. For a long time I've been searching for a Large Whip-snake. This beautiful snake is fast, agile and aggressive. In the past I've had only two encounters with this snake. Once something slithered in the hay in an extremely fast speed, climbed up a tree and was gone. 90 % sure it was a Large Whip-snake. The second time was two weeks ago. 20 to 30 meters from the Nose-horned Viper ( see pic of the wee # 37) something slithered just in front of my friend. When he noticed me about the snake, it was already climbing up in the tree next to us and next it was gone. We tried to look for it, but nothing. 98 % sure it was a Large Whip-snake. This weekend I went to Vraca, a town about one and a half an hour drive from Sofia. We headed a bit out of the town to a place called Божия мост, the gods bridge. Interesting natural monument just outside of the town. Already on our way there I noticed that the surroundings look just like perfect habitat for this robust snake. So when returning I decided we'll stop for a few minutes and I'll take a look under a few stones. After twenty minutes of searching I struck gold. Under a pile of rubble, there it was, a tiny juvenile whip snake. It is amazing how fast these critters are. This tiny snake was moving among the rocks with a speed that made it almost impossible to keep your focus on it. Finally it slithered under a rock and I managed to grab its tail, just to feel its tiny sharp teeth in my skin. After a while it calmed down a bit and I managed to make a few images. 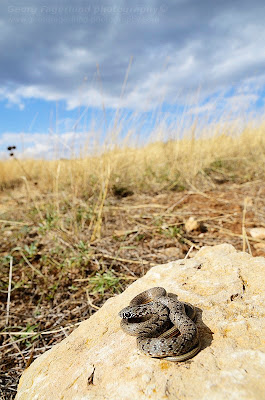 A tiny small juvenile Large Whip-snake (Dolichopis caspius). Cute and aggressive.
Posted by Georg Fagerlund at 5:46 AM No comments:

Ten weeks have past by and I haven't updated my website, all this due to lack of inspiration and because of great hurry. Anyway, I thought that from now on I'll try to fix this and start to post a picture in the end or in the beginning of each new week. For this week, which almost has already come to its end, I show you this picture: 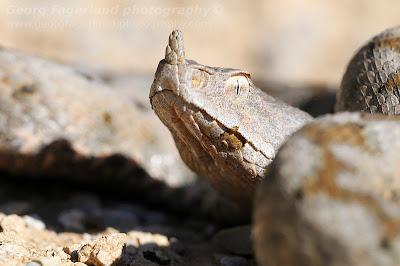 I didn't hope to find any snakes when we took a walk with a friend of mine last week. It was a hot day so I assumed that it would be impossible to see one, thinking they are all hiding under rocks and stones. Even if I've been "flipping" around in the place we went, I've never found a single reptile, so this is why I didn't have any high hopes for snakes. The truth is that it was pretty dead every were, just a few grasshoppers here and there and a few occasional hornets flying by. Then we decided to return and change the spot. On the road back, I suddenly saw something slithering on the ground. Oh boy, the reward, a nice middle sized Nose-horned Viper. I'm so happy that I had my snake hook with me. I grabbed the snake at its tail and lifted it under my cap, which was waiting on the ground. We waited for a few minutes, removed the hat and made a few shots. Even if this snake species is one of the most venomous in the Europe, I have to say that at least this guy were very calm and I enjoyed working with him.
Posted by Georg Fagerlund at 6:54 AM No comments: