On Monday the weather was just excellent so we decided to take a small walk in the wild. One of my goals for this year was to take an image of a snake eyed skink, a tiny but very fast reptile. In some places they are pretty numerous and are easy to find. Making a decent photo is a different story. Mentioned about my goal to my wife and after less than half an hour I accidentally noticed one skink escaping under the dry leafs on the ground. A little digging and I managed gently to grab the fellow from the ground and make a couple of pictures. Here is one... 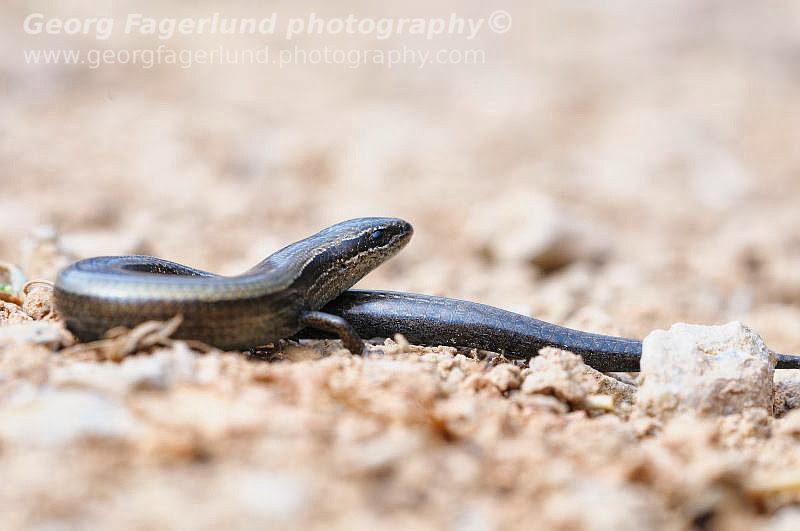 When we were on the road back to the car we stumbled across this violet oil beetle and of course we had to make a few images... 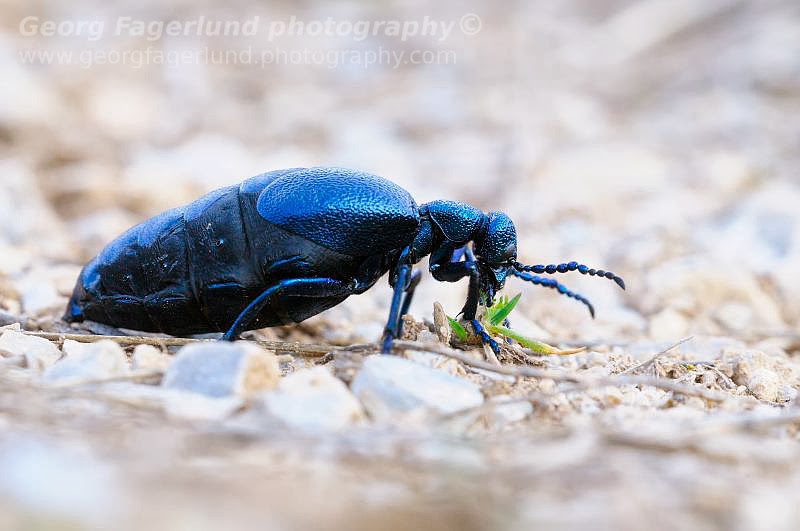 Posted by Georg Fagerlund at 1:40 AM No comments:

The spring is here!!!

A bit strange that its mid February and the spring is already here. Of course you never know what the March month will bring, but lets enjoy as long as the weather is nice. Here's some photos from the last two days... 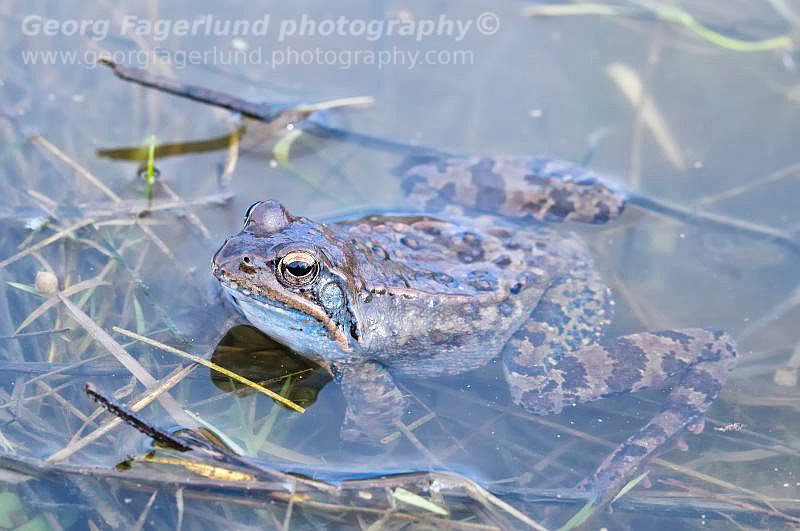 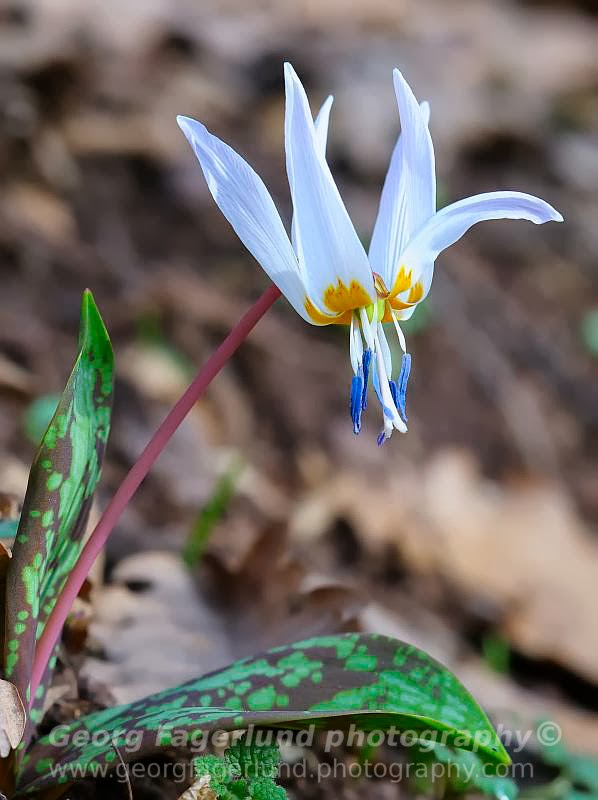 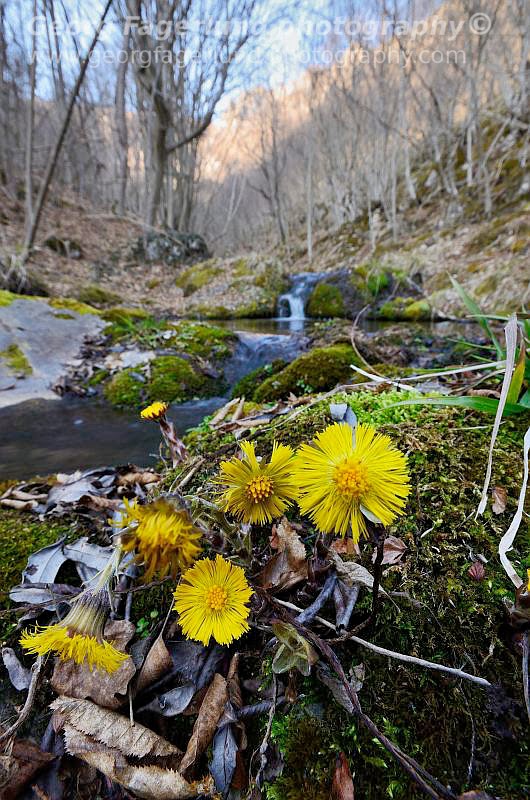 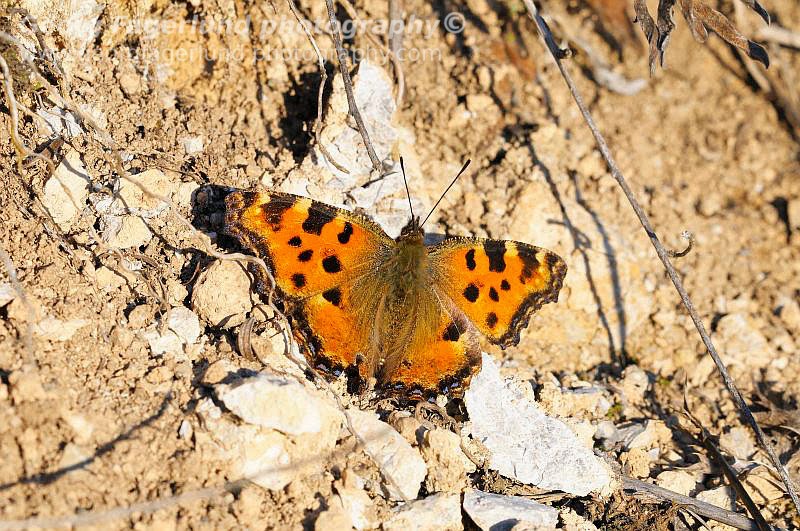 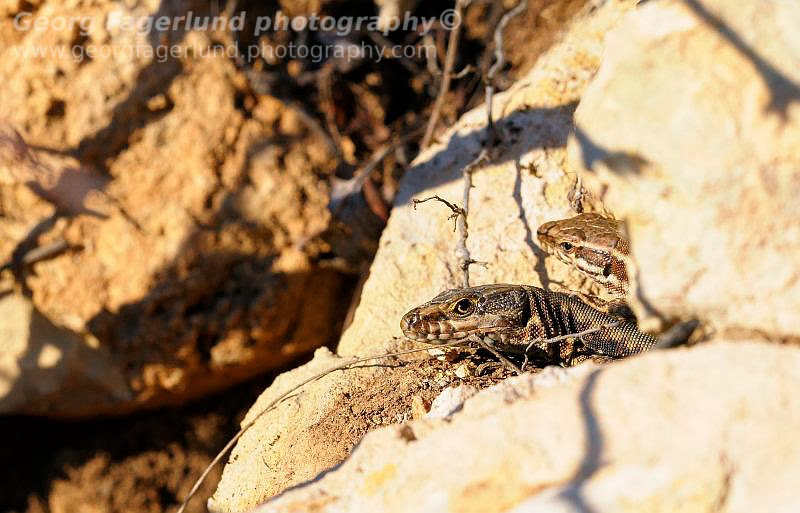 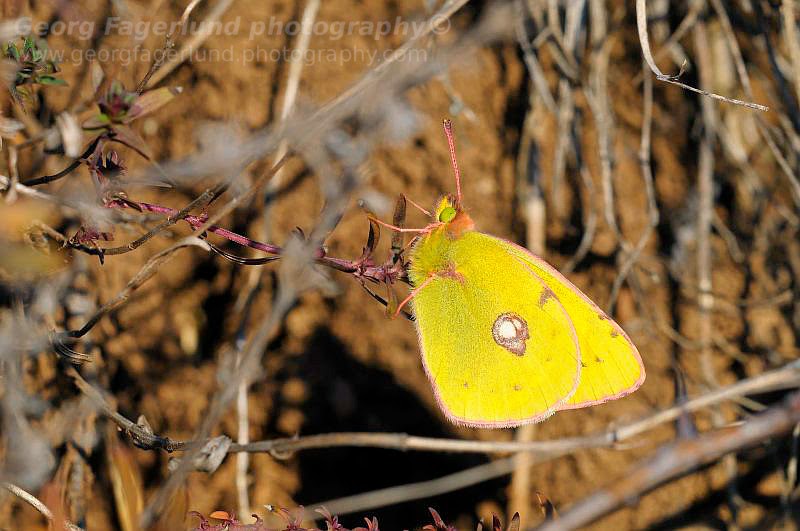 Posted by Georg Fagerlund at 10:17 AM No comments:

I'm not really a big fan of the winter. Cold, snow, wet, cold and cold. But there still is something in the winter that's great, the light. One morning I decided to pack my gear in the bag and hit the road. Here's a few photos... 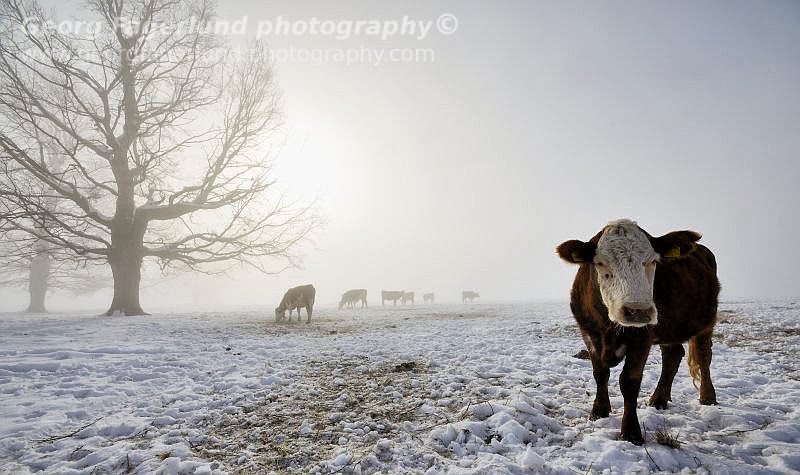 First stop was at a near by field. Beautiful light passing the morning mist. The cow in the foreground didn't really want to be photographed but I managed to make a few photos on her.
Then I saw a few birds feeding on the ground as I moved on. I stopped the car and tried to make a few images. Too much fog. But then the flock took of and I had my chance... 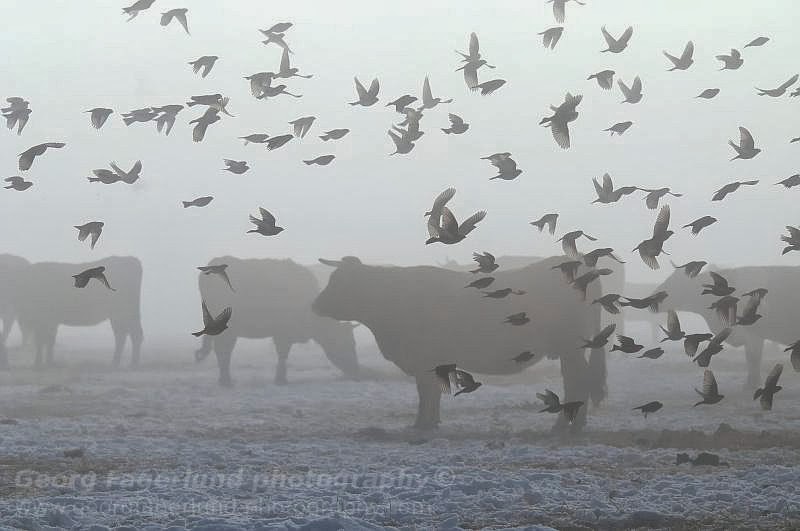 A couple of meters ahead I noticed that the clouds and the fog are starting to fade away and this just superb lighting appeared... 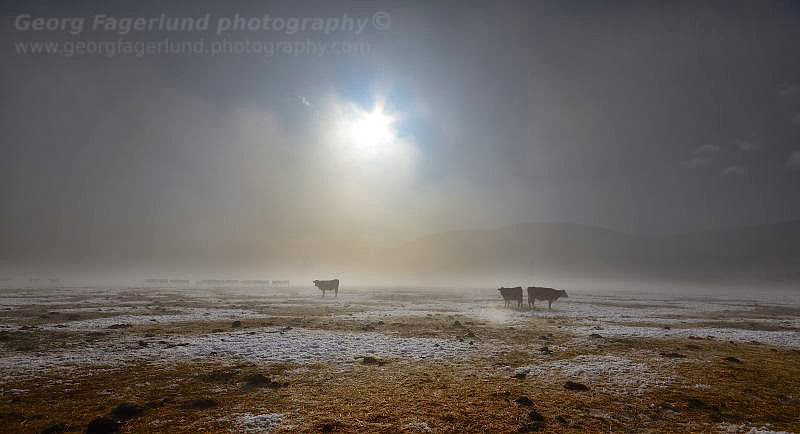 One more stop at a house were I saw a Little Owl two years ago. And there it was again, sitting on the top of that same chimney and stared at me with its sharp eyes... 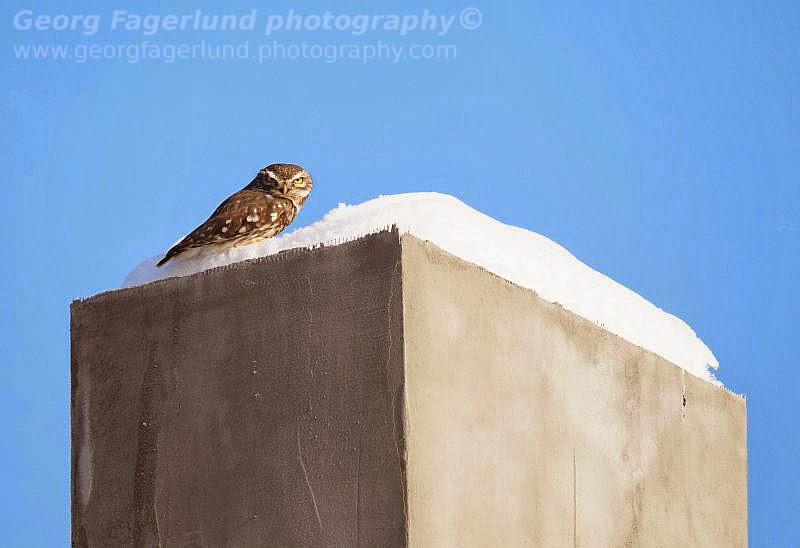 Lonely trees are always good subjects, so here is one final image... 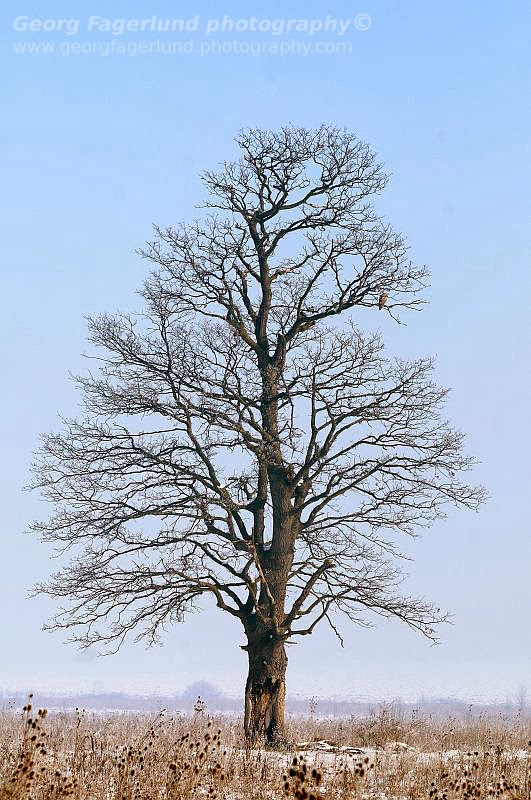 Posted by Georg Fagerlund at 8:04 AM No comments:

My opinion on the Vanguard Alta Pro 263AT tripod

As the spring is on its way, I thought it might be a good time to make a short review of the Vanguard Alta Pro 263AT tripod. When I started photography for about eight years ago I thought, like many do, that a tripod is more or less of a burden when you make photos. So what did I do? I didn't use one. Of course a tripod is an essential tool for a photog, so finally even I got one. It was one of those cheap 20 € tripods which tend to be flimsy and mainly work only under less heavy P&S-cameras. I used my first tripod in very very few situations and I even broke it quite soon, so I really can't say I was using a tripod.
Then I stumbled across a Chinese heavy duty tripod, made of steel, only 70 €. When I say heavy duty, I really mean heavy. Not really one of those things you want to haul around for a long time. Well... I hauled it on the top of this hill anyway. 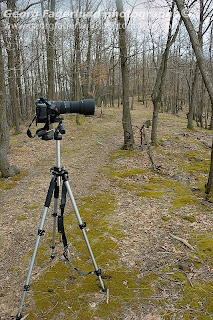 So even if a bit heavy I still used it, at least occasionally. But when I say heavy, it don't mean sturdy and  thus my use of a tripod was still more or less of an exception.
Then I found the Manfrotto 715B aluminum tripod for about 40 €. Flimsy, but I knew it when I bought it and I still use it as a flash stand.
Then I got a Slik PRO 330DX tripod. This time I was serious, I needed a good tripod. In the shop, the guy who was behind the desk said it's a good tripod and then asked what gear I intended to use with it. I told him that my heaviest combo was a Nikon D300 with a Sigma 150-500mm zoom lens. "Oh, I thought you will use something seriously heavy on it. For that combo this is good enough." That's about what he said, so I got it, 120 € with the SH-705E head. The Slik was pretty good tripod if you compare it with the other three I had had before, but in my opinion it wasn't good enough even if the seller had told so. With this tripod I though started to feel shooting from a tripod more convenient and as I used the tripod more and more, I noticed that the keeper ratio of my photos increased.
So, even if using a tripod, often  is a bit of a pain in the butt, it still is a tool which I highly recommend for all photographers. You can go my route, that is buying cheap and many or you could buy one for a little more money and be happy with the one you get. I payed 250 € and then I got the Vanguard one for $ 190 US... So, so far I've been spending about 410 € on tripods and heads.

Vanguard Alta Pro 263AT is an aluminum tripod, so it is not as light as a carbon fiber tripod would be, but I don't believe that the weight would be too much of a problem. The height i pretty good, with the SBH-250 ball head the view finder is at a height of 154 cm, legs out and spread, so I (I'm 175 cm tall) don't need to bend too much to use the camera, good for the back. My heaviest combo weights about 3 kg and in my opinion the tripod and the head carries this pretty decently, probably it'll work well even with heavier loads. There is lots of knobs and locks. On the ball head there is four knobs and one button. The button works as a release for the QR-plate. One knob is for locking up the QR-plate. One other knob is for rotating the head, one knob stands for loosening and tightening the ball and finally one is for adjusting the friction and movement of the ball. Each leg has two quick locks which are pretty easy to use. One of the specialties of this tripod is that you can swivel the center column, something that is useful when wanting to shoot from low angles or when shooting macros. For the purpose there is two knobs, one loosening the center pole and one for rotating it. There is a lock for moving the hinge and a tiny small button in the other end of the center pole just to keep the pole from moving too high accidentally. So quite a lot of locks and knobs and buttons, and to be honest it's sometimes quite difficult to remember which one does what, but I guess with time and training... maybe. One reason why I wanted this tripod was the ability to to swivel the center pole and make some neat low angle landscape shots. When shooting from low, I most often place my camera on the ground and usually that's fine. But it's a different story when there is no ground but only water, like in this image... 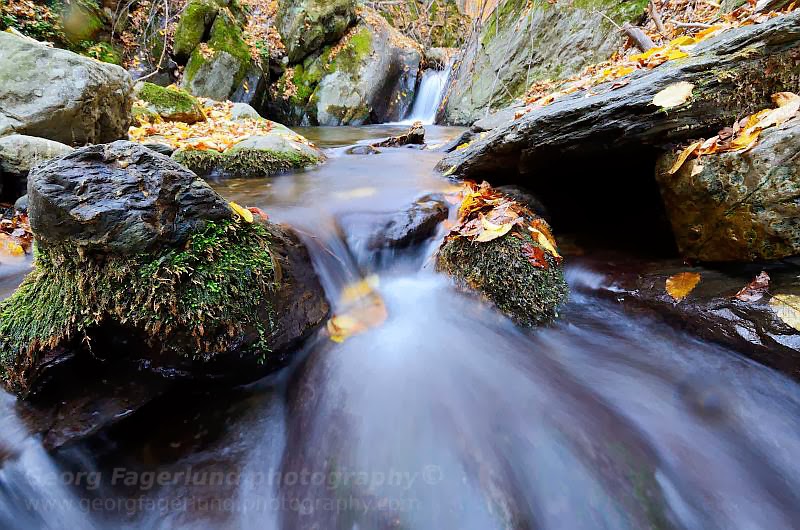 ... So I thought, that when I have a tripod with an articulated center pole, it'll be easy to get really low on the water surface without risking my camera to get too wet. There is a "but". Even if the tripod it self allows me to get low, there is only so much you can swivel the tripod head. The head allows me to make adjustments only up to 90 degrees and thus getting properly leveled images may be a pain.  I though have to mention that this would most likely be the case with all the tripod heads on the marked, no matter the brand. Anyway, this small detail was a disappointment for me, but I'll live with it. One more tiny detail is that the tripod ain't water sealed, meaning that when shooting in water, the water will get inside the legs. 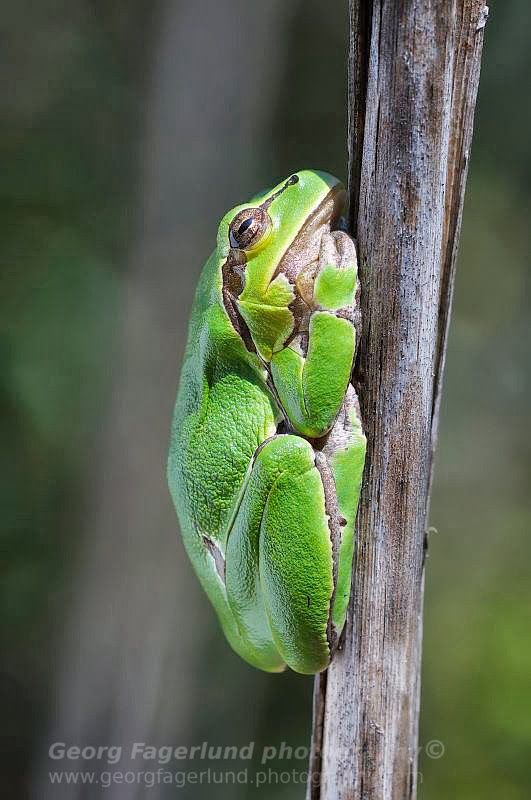 When shooting this frog I had to place the tripod in the water which of course meant that that when finishing the shooting, the leg pipes were filled with water. Not really a problem because the water usually runs out from the pipes just by itself, but something you might want to watch out for is lifting the tripod on your shoulder and squeezing the legs back to the short position immediately after using it in water. Why? Because, if the water hasn't run out from the leg or legs and you are pressing the leg in, from the camera end of the leg there may spray out some water with pressure and make your camera, lens or both wet. Just a thing I accidentally noticed and is a good thing to know if you use the tripod in the water.

So... Vanguard Alta Pro 263AT, is it worth anything? In my opinion this is a fairly good tripod. It's biggest flaw is the multitude of locks and knobs, although with a little practice you'll get over it. It is sturdy and enough high. It goes down low for nice low angle shots. The tripod comes with two QR-plates, a nice thing if you use two camera bodies. So if you need a good tripod but can't afford to by one of those expensive "pro" tripods, I think this is a very good choice when you compare the quality and the price.

Posted by Georg Fagerlund at 3:06 AM No comments: