How a snake should look

As the spring is approaching (hopefully), it means that soon there will be lots of all kinds of critters and crawlers around us. When it come to animals, people usually seem to divide them in to two categories, the good ones and the bad ones. In to the "good" category they'll put the cute ones, the majestic ones, and nice ones... cats, sheep, deer, dolphins, squirrels, and so on and so on... I love them too, they are nice. Then there's the "bad" group. That's rats, all kinds of insects, mice and then of course the slithering guys, snakes etc. No one probably would think when they see a squirrel "Ooh, how ugly, it has to be killed! Where is a shovel so that I can cut its head off?!" But alas when they see some of the "bad" category animals, "Kill it, kill it!!!", is the first thought in their mind. That's just so sad. Animals, no matter if they are in our eyes "good" or "bad", should be left alive if they are living in their own habitat and not doing any harm for anyone. Here's a couple of images. The first two are of a completely harmless grass snake and the other two of an other harmless, and actually quite a useful for farmers snake called aesculapian snake. And when looking at the images think, think who's worse for the other, a tiny little snake who's trying to escape when encountered by a human being or the big guy who sees a small snake and plays a big hero by killing that poor critter, and just to show off, lifts the animals body somewhere high so that others can see what kind of a "hero" he is? 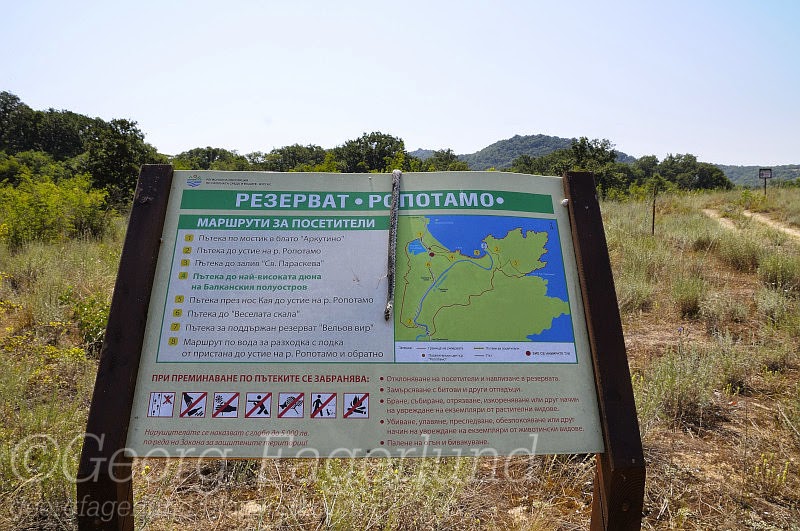 This is how a snake definitely shouldn't look. Killed and placed on nature reserve guide sign. 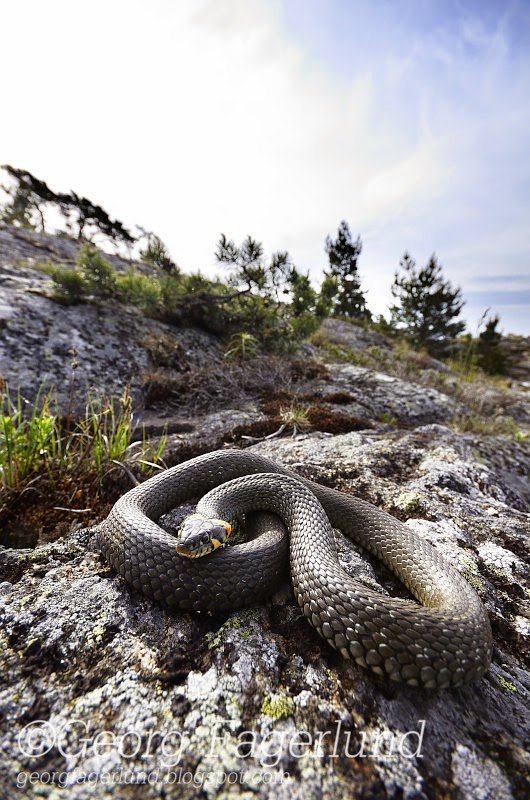 This is how a grass snake should look. Wild and free. These guys rarely even try to bite. 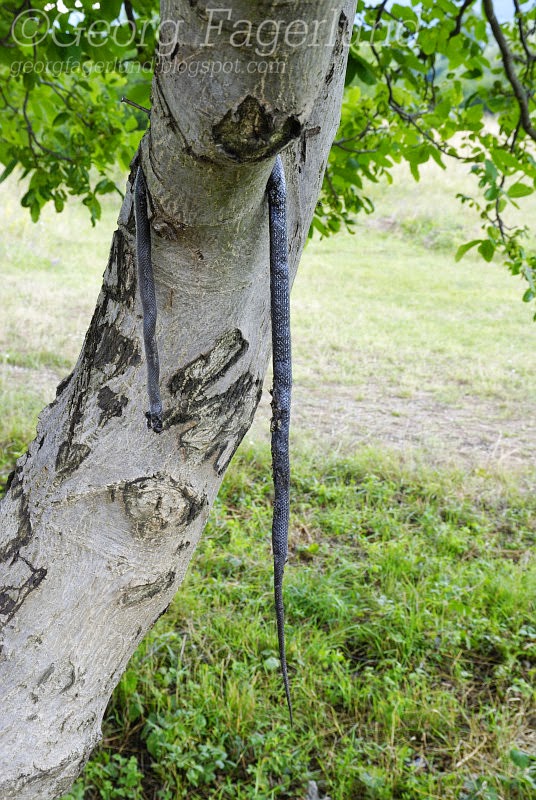 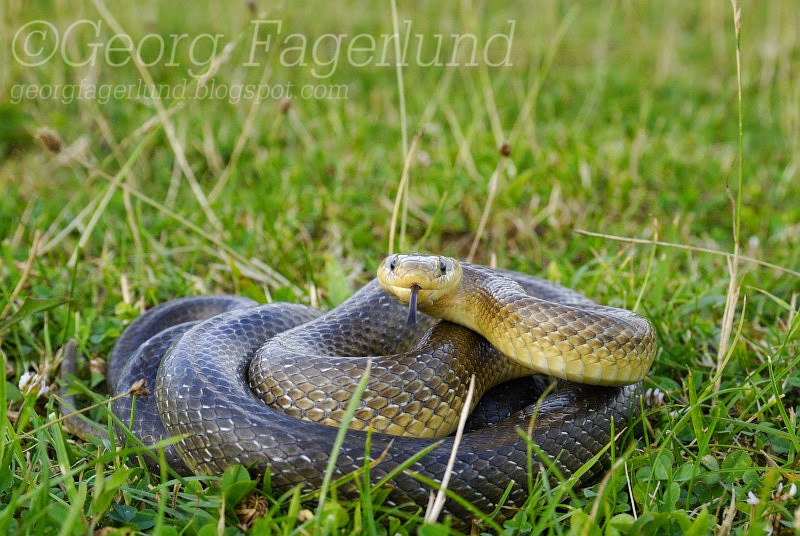 This is how an Aesculapian snake have to look. Ready to feed on some rodents.
Posted by Georg Fagerlund at 12:42 PM No comments:

Time flies, that's for sure. Now it's almost the end of the January, but sooner, and I emphasize the word sooner, or later you realize that now it's here. And you ask, "What's here?". The 2015 special convention of Jehovah's Witnesses of course. There will be some, not just only one, and one is to be held in Sofia, Bulgaria. I'm pretty sure that brothers and sisters are pretty excited and eagerly waiting for this special occasion. At the local branch office of JW, the brothers are having lots of work to be done before everything is ready. There's coming delegates from other countries too. Something about 5000 delegates, what I've heard. Nice. Meanwhile the publishers in the congregations were asked to think about something nice, which they eventually could give as a small gift to the brothers and sisters attending the convention. As a photog. with a few photos in the archives, I thought a postcard might work as such gift. This is how it looks. What's left is to make an order. 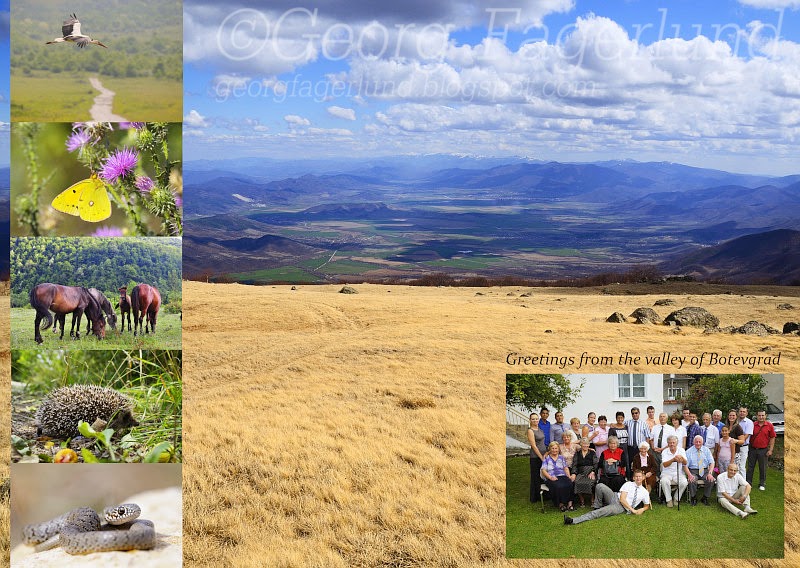 Posted by Georg Fagerlund at 10:02 AM No comments:

Don't try this at home!

When lighting subjects, I prefer natural light. The sun is still the best source of light in my opinion. But there's a problem with the sun, it sets and you can't bring it inside (at least not very easily) . That's when you have to use some other light sources. A strobe can be good. Skillful use of a strobe(s) can actually look very natural. Then you can try to use what you have in your hands at the moment, household lamps, flashlights etc. or you could just give matches and a cardboard box to your semi pyromaniac father in law and you have the best off camera lighting that you ever can imagine... 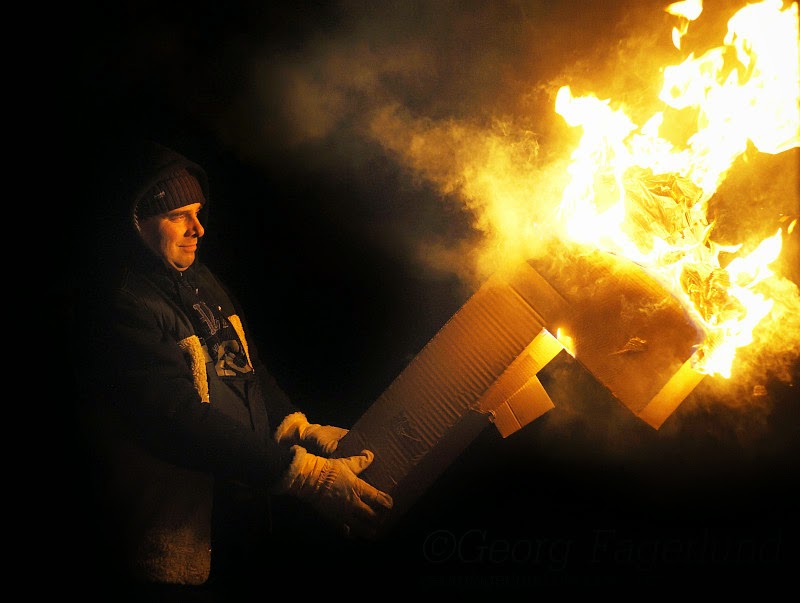 Most of the time I'm usually photographing wildlife just by my self. There's so many people who just aren't interested in getting out there and getting their feet wet. Telling a person that I'm going to look for snakes is an other thing that usually makes people to stay at home, rather than taking a walk with me in the wild. Not that I wouldn't enjoy outdoors just by myself, with only my gear as company, but still, sometimes it's nice to have company, and every now and then there are some brave individuals who are interested to share my passion, not only for photography, but for reptiles too. Here's a couple of images of those brave ones... 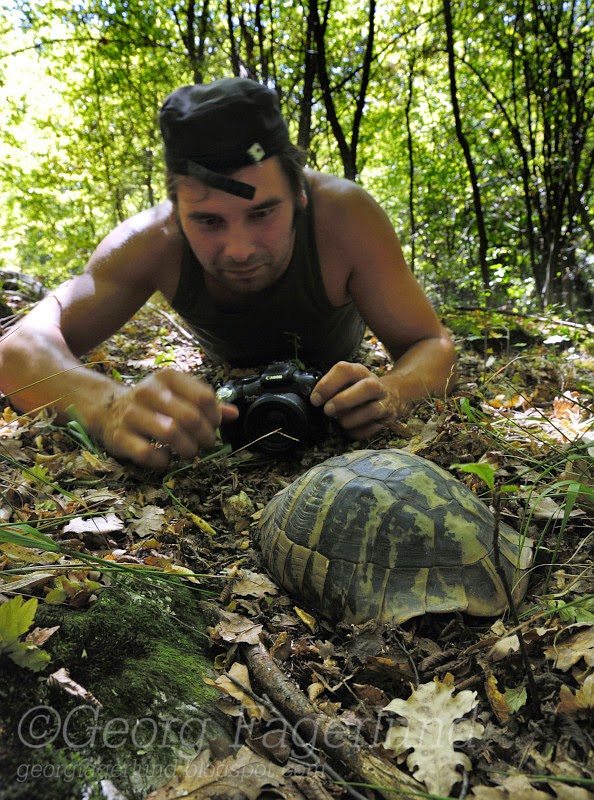 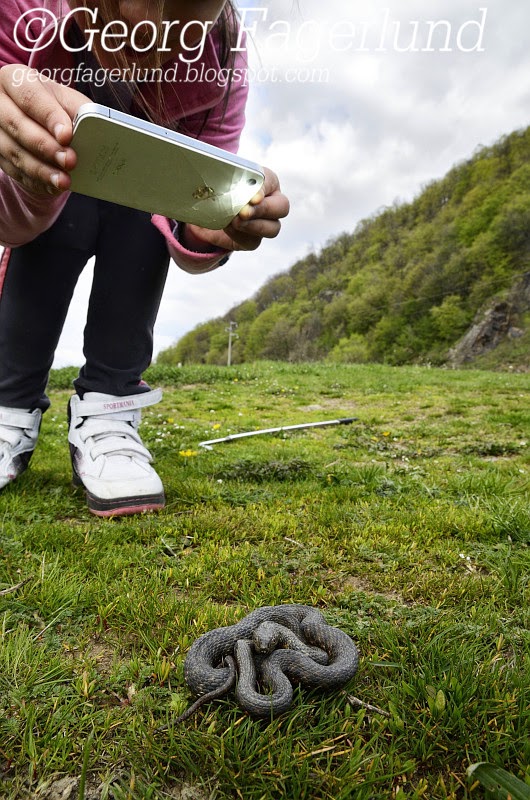 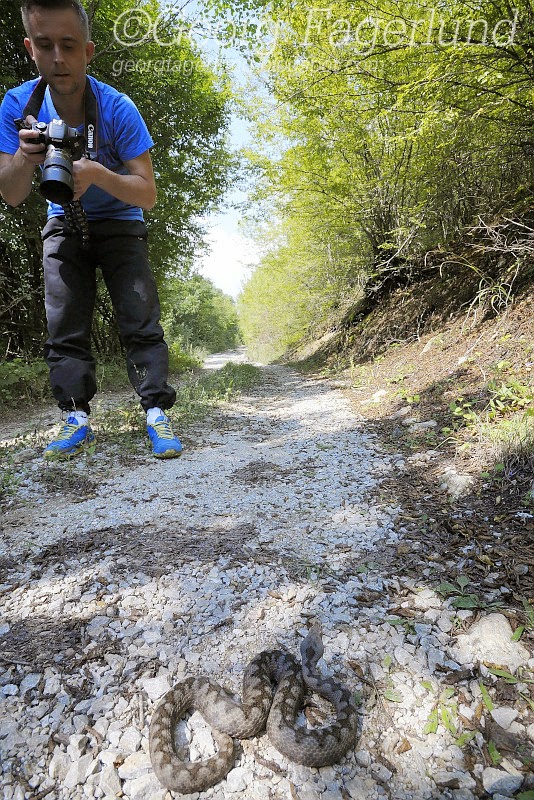 Posted by Georg Fagerlund at 12:04 PM No comments:

Nothing beats the sunset or that magical light which you have just before the sun is setting down. Maybe the sunrise would be as good, but I'm usually sleeping early in the morning, and it takes time for me to get the motor running, so in my case I'll  usually just enjoy of the morning sun with a cup of coffee, and in the evening I'm ready to walk my camera and make a couple of images. Here's two images from today, horses and sunset... 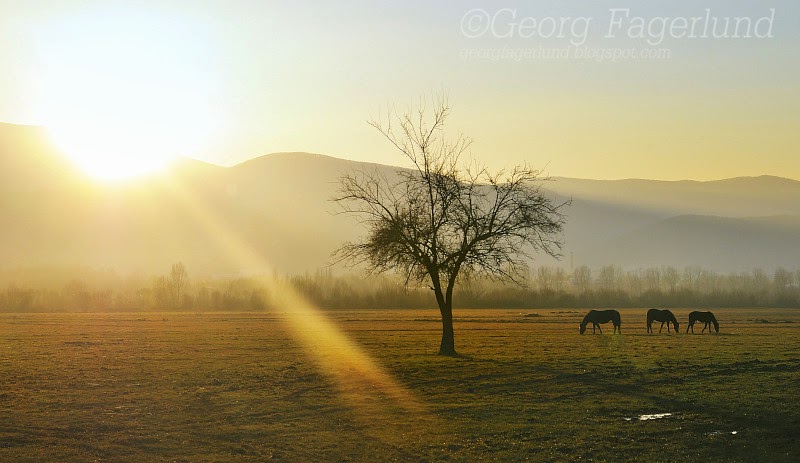 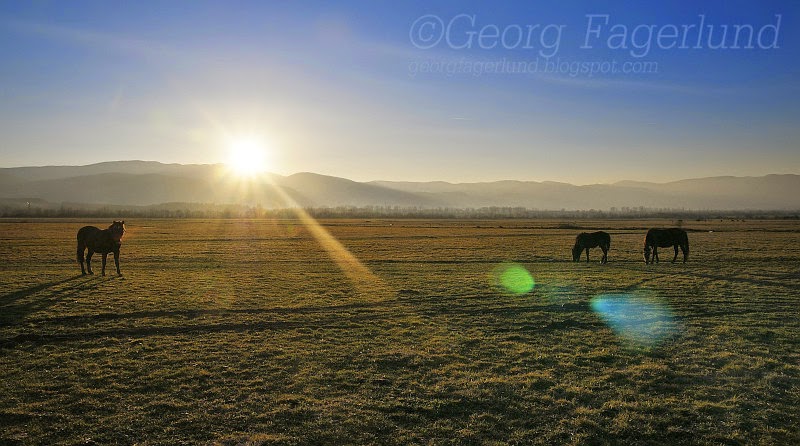 Posted by Georg Fagerlund at 9:22 AM No comments:

The art of cooling your self (on a shelf)

During the winter, we usually don't suffer too often of high temperatures that make us sweat, but in the summer it can get really hot. There's different ways to cope with the problem. Some people try to find shadow. Some try to cool them self off with a cold drink. Some one else will wear a swimsuit and take a dip in the sea or in a lake. And finally you can go this way... 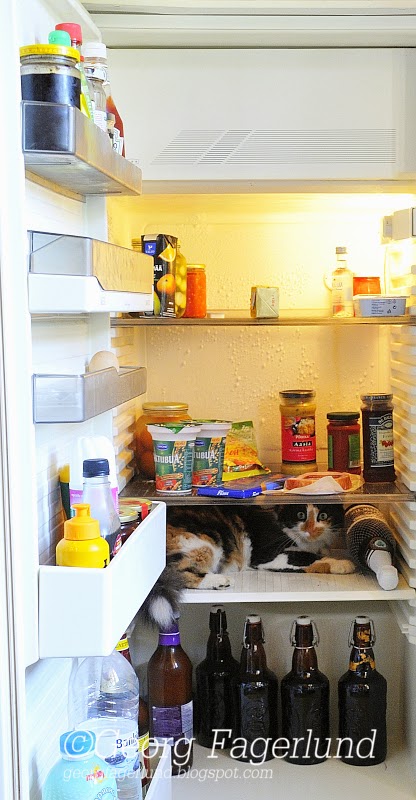